As tens of thousands of ageing timber bridges throughout regional Australia continue towards the end of their structural lives, local governments and councils are struggling to bring regional infrastructure to an adequate standard. With no plywood bridge deck system available, Councils have been forced to lower road limits and reduce speed limits on the roads which serves only as a band-aid solution to the continuing deterioration and disrepair of the approximate 30,000 timber bridges that are currently deemed unsafe.

A solution to rehabilitate timber bridges that are in desperate need of repair or replacement is now available in the form of a new plywood bridge deck system, called Bridgeply, just launched by national timber specialist and major plywood manufacturer, Big River Group.

Bridgeply is an engineered substitute for traditional hardwood decking and an economically sound alternative. Bridgeply can effectively extend the safety, lifespan and capacity of ageing timber bridges with a considerable cost saving and at a significantly reduced rate of construction.

Until now councils have been relying on steel or concrete alternatives to replace and repair their timber bridges, which come at a significantly increased cost. Consequently timber bridges have continued to deteriorate with the volume of maintenance and cost falling way out of control. Bridgeply can replace damaged and deteriorated timber without having to replace a bridge entirely and offers a more accessible solution to the crisis that local governments and councils are struggling to maintain. 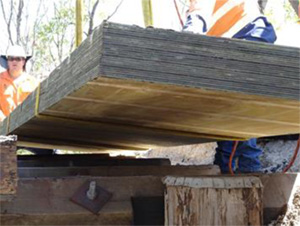 Timber bridges are critical components of local transportation infrastructure and the majority are at a national crisis point where bridges are not able to meet the service needs of the users. A number of reports have been undertaken to identify the size of the issue and the results have confirmed the situation as significant.

The National State of the Assets Report, carried out in 2013 under the instruction of the Australian Local Government, considers the condition of timber bridges from 344 respondent urban and rural councils. The timber bridges considered in the Report represent $1.5 billion in value and of these the quality of some, valued at $0.46 billion, are regarded as being in a poor or very poor state.

Maintenance costs have so far been unachievable and councils continue to struggle towards a solution that will save rural communities from being cut off entirely.

In November 2013 the Federal Government announced the Bridges Renewal Program and has offered $300 million to match state and council authorities’ investment in upgrading bridges, but this still leaves a shortfall and as bridges continue along their lifespan the significant gap in funding only widens.

Many local governments have been investing in asset management planning for over a decade and the National State of the Assets Report cites that timber bridges are the asset class with the least coverage by asset management plans when compared to sealed roads, unsealed roads and concrete bridges. The Report identifies that councils are expressing significant doubt on the quality, function and capacity of timber bridges. 2

Big River is launching Bridgeply to serve as a replacement for bridge decking where suitable lengths of solid hardwood timber are not available. Maintaining a width of 1200mm, lengths and thicknesses can be made to meet specifications offering great flexibility in design. Bridgeply is particularly effective for smaller bridges and the ply is cross-laminated to ensure that longitudinal and lateral stiffness are evenly distributed.

To date, Bridgeply has seen uptake in Queensland with a considerable number of bridges on the radar for repair.

Structural qualities of Bridgeply include: 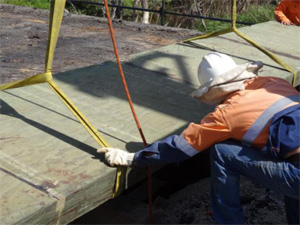 Bridgeply is a retrofit solution that can help extend the life of timber bridges by decades. Rehabilitating existing structures with Bridgeply will not only provide significant cost savings of material but the lightweight handling means installation can occur without losing too much time and with minimal disruption to traffic. The strength and sturdiness of Bridgeply components reinforce areas of weakness without having to replace the entire bridge.

With more than 110 years in the timber industry, the Big River Group is one of the largest private timber manufacturing and marketing businesses in Australia, servicing all states and many international projects.